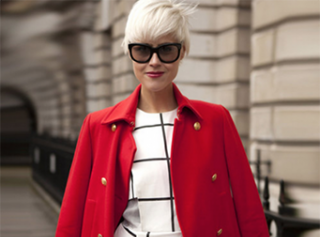 Vanity Fair’ s International Best-Dressed List Challenge is underway and heating up every day. Top notch fashion photos dress up the contest page and contestants are rallying friends to vote for their chance to be named to the Best Dressed List. Along with a growing applicant pool, several new features have been launched by the Tidal team for VF hopefuls to interact with: the Leaderboard went live in March where you can see who has been selected for the week’s Editors’ Picks and who is climbing the ranks in votes. An embed feature has also been implemented so that entrants can add the looks they’ve submitted in the International Best-Dressed List Challenge on their personal websites and blogs.

We caught up with Kelly Butler, Digital Projects Editor for Vanity Fair, to learn more about the competition from the publication side.

The intensity of this competition continues to climb in anticipation of June’s announced winner. Can you tell me a bit more about the process of choosing the editor’s picks?

Sure! The International Best-Dressed List is owned by four editors at Vanity Fair: Amy Fine Collins, Graydon Carter, Aimee Bell, and Reinaldo Herrera. Amy and Reinaldo are responsible for choosing the Editors’ Picks each week. We also have a mix of guest judges coming in every week, which is great because it brings in different styles and opinions.

This is only the second year the competition is open to the public. How do you think the judges are reacting to the submissions they’re receiving?

I think they’re excited to see how high the quality of submissions are. These images show super high fashion with top-quality photographs. They’re excited to engage the fashion community and fashion bloggers. This list is so important to the magazine and we wanted a way to incorporate it with our website. It’s also a fun thing to have as a lead up to the final list release, and it makes the International Best-Dressed List Challenge a bit more accessible to the public.

Do you get to choose your own picks?

No, I’m working more behind-the-scenes but I have been saving my personal favorite looks to a gallery. I’ve also compiled some galleries for the VF account. I think we’re having fun and figuring out the best way to use these tools and learning as we go. It’s our first year collaborating with Tidal so we’re seeing what’s possible.

Exactly! One of your editors came up with that and I love it.

How has managing it all been?

Tidal has been so helpful to manage and organize and keep track of everything. And I’m kind of obsessed with looking at the traffic numbers—how many new looks we are getting each day, things like that.

Is there one trend that you’ve been seeing a lot of that judges are responding to?

I’ve seen a lot of stripes—that’s really big. Really beautiful photographs with really eye-catching style. And it’s been a wide range of styles that the judges are picking. It’s not all formal dress wear, it’s a nice mix of casual looks with more high end.

What are you excited about in terms of IBDL?

One thing we’re really excited about is our User’s Choice competition that runs every month. We want people to continue voting. April’s just opened and we’ll be announcing the March winner soon.

If you’re interested in submitting but haven’t yet, it’s not too late to get in the game. Head on over to IBDL.VanityFair.com. The Monthly User’s Choice winner will be entered in the Best-Dressed grand prize competition in July. Winners will appear in the September 2014 Vanity Fair issue, on newsstands in early August. Plus, make your own galleries, save your favorite looks and vote for who you think should join the ranks of International Best-Dressed.